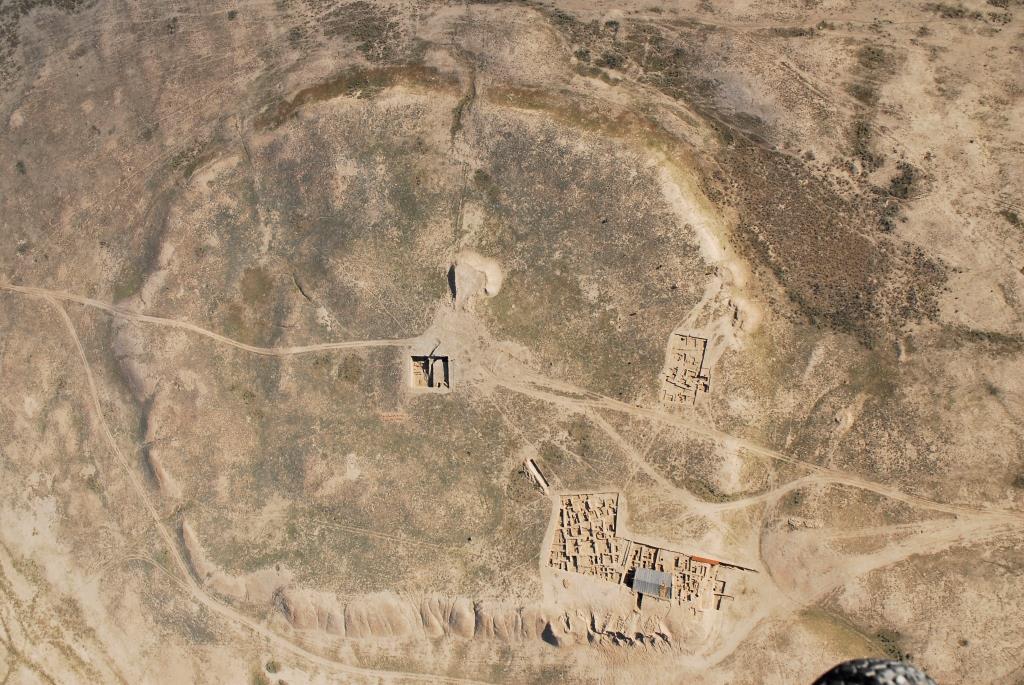 The settlement is situated 45 km. to the north-west of Turkestan, 3 km. to the south-west of the medieval town of Sauran (ХІV-ХVІІІ century), 4 km. to the west of the railway crossing  № 30. The hillfort is a large three-level hill, which in shape resembles a pentagonal heraldic shield. The sides of the pentagon have the following dimensions: north-west side – 250 m, north side – 165 m, south-west side – 180 m, southeast side – 280 m and east side – 180 m. In north-west part of the ancient settlement is the citadel of the city. Its northern side is 70 m., the north-west side is 110 m., the south-west side is 160 m., the north-east side is 160 m., the southeast is 60 m. The citadel base is rectangular with a height of 11 m. The tower is 15 m high and its base is 20 m in diameter. The citadel is located at an altitude of 213, 6 m above sea level, while Shahristan is at an altitude of 209 m. In the north, north-west, south-west and east corners the foundations of the fortification towers were preserved. The regions of the fortress rabad are clearly traced around the main hill. The total area of ​​rabad is 18.2 hectares, shahristan – 11.2 hectares, citadel – 3.5 hectares. Thus, the total area of ​​the ancient settlement including Rabad is more than 30 hectares. The first description of this fortified settlement appeared in the works of the YuKCE (AN Bernshtam) in 1947. This expedition made a topographic plan for the settlement and based on the analysis of the lifting material dated the site of the settlement of the VI – XIII centuries. In 1986, the expedition of the Institute of Archeology, led by K. Baipakov, conducted archaeological research on the Sauran and Karatobe fortifications. In 2003, a detachment of the Turkestan archaeological expedition under the leadership of M. Tuyakbaev first laid an exploratory stratigraphic pits. Archaeological research was continued in 2005-2008. The settlement of Karatobe under No. 634 is registered in the “Collection of monuments of history and culture of Kazakhstan. South-Kazakhstan region ” and taken under the protection of the state. The total area of ​​the protected area is 100 hectares.