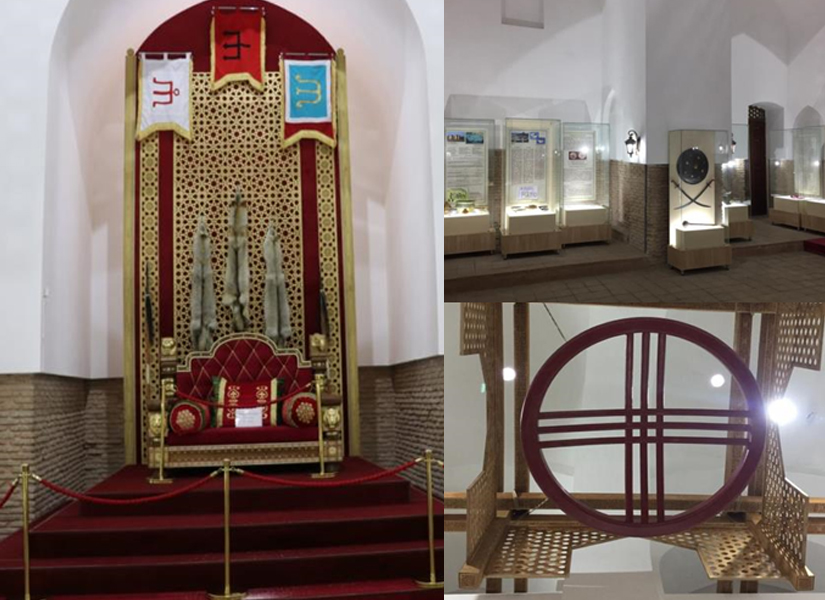 In the North-Eastern section of the building there is a Large Aksaray and a Small Aksaray lying opposite. The name of the premises is not related to their color (“AK-Saray” means literally “white chamber Palace”), but to their use as Palace premises in the XVI-XVIII centuries, when the residence of the Kazakh khans of the Elder and Middle zhuzes was located in Turkestan, which at one time drew the attention of T. K. Basenov. Large and Small AK-Saray have walk-through galleries on the second tier.

In Turkestan Kazakh khans received foreign ambassadors by Tauke Khan (1652-1717). In Russian sources the description of reception of the Russian ambassadors on July 22, 1694. During the negotiations held at that time, the Kazakh Khan demanded equal relations. He States that Tauke Khan does not consider any higher than the Turkic Sultan and the king of kyzylbas (Persian). Turkestan city became the venue for the meeting of the Kazakh khanates and aristocrats. One source indicates that the famous Kazakh dance Tole Alibekuly arrived in July 1744:”… In Turkestan, Tole bi, the most outstanding Kazakh people, revered above the Khan in Tashkent, came to meet with Abilmambet.”

One of the important points here is the installation of the tombstone Kazybek bi.