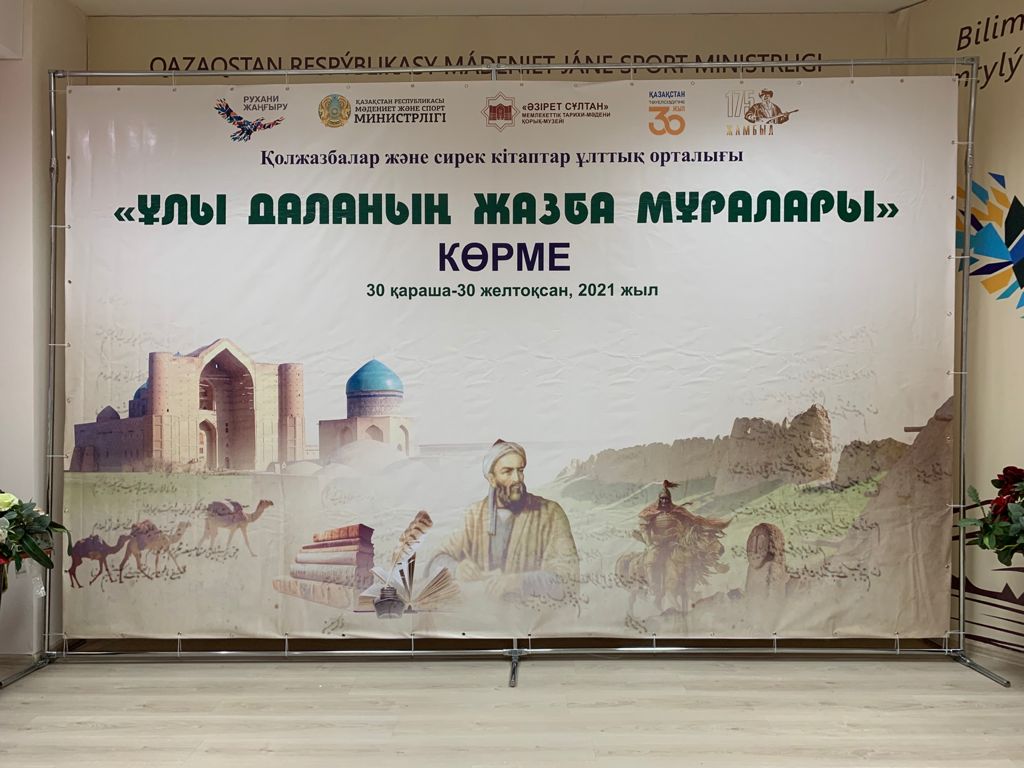 The exhibition “Written Heritage of the Great Steppe”, organized by the State Historical and Cultural Museum-Reserve “Azret Sultan” of the Ministry of Culture and Sports of the Republic of Kazakhstan, opened at the National Center of Manuscripts and Rare Books in Nur-Sultan.

Deputy Director of the Committee of Culture of the Ministry of Culture and Sports of the Republic of Kazakhstan Maksat Argynbekov, Acting Director of the State Historical and Cultural Reserve-Museum “Azret Sultan” Yersin Tazhibayev, Director of the National Center for Manuscripts and Rare Books, PhD Zhandos Boldykov cut the ribbon of the exhibition.

– “The exhibition dedicated to December 1, the Day of the First President and the 30th anniversary of the country’s independence, has great historical significance. The Azret Sultan Museum-Reserve is doing a lot of work to popularize and present to the public the exhibits and heritage stored in the fund. Information about the manuscripts, which have passed from century to century, gives a great impression on the disclosure of the historical perspective of each person, respect for the past. I congratulate on the opening of the exhibition, which is of particular importance, and wish you success in your work!”,- said Maksat Argynbekov.

-The exhibition “Written Heritage of the Great Steppe” featured handwritten Korans and tafsirs, hadiths and Ghazals, hikmets and historical artifacts related to the field of law, logic, geometry, astronomy, stored in the funds of the Azret Sultan Museum-Reserve.

The exposition contains about 60 exhibits. Of these, 37 are written monuments, 15 paintings with verses of the Holy Quran, stands, tasbihi and candles. The exhibition will be presented to residents and guests of the capital within a month, “said Ersin Tazhibaev.

In turn, the director of the National Center for Manuscripts and Rare Books, Doctor PhD Zhandos Bekdildaevich also thanked all the guests and noted that the work on maintaining business relations between the reserve-museum and the center would continue.
The exposition of the exhibition “Written heritage of the Great Steppe” includes handwritten Korans of the XVII-XIX centuries, printed Korans published by the Kazan publishing house in the early twentieth century, tafsirs published by the Kazan publishing house in Arabic and Persian in 1910, hadiths of Muhammad from the Istanbul printing house Dar al-Khalifat Al-Galiya Gamir, written by Sahiha al-Bukhari in Arabic in 1897, the book “One Thousand and One Hadith”, published in 1906 in printing houses “brothers Karimov” in Kazan in the Turkic language, copies of Khoja Ahmed Yasawi’s handwritten book “Divani Hikmet”, published in 1845, versions of the book “Divani Hikmet”, published in Kazan, and other valuable exhibits.

The fund of the State Historical and Cultural Reserve-Museum “Azret Sultan” has more than 26 thousand exhibits, including 634 books related to the main and scientific-auxiliary fund.

Exhibition “Нistory of Turkіstan on Numismatic materials” opened in Turkistan