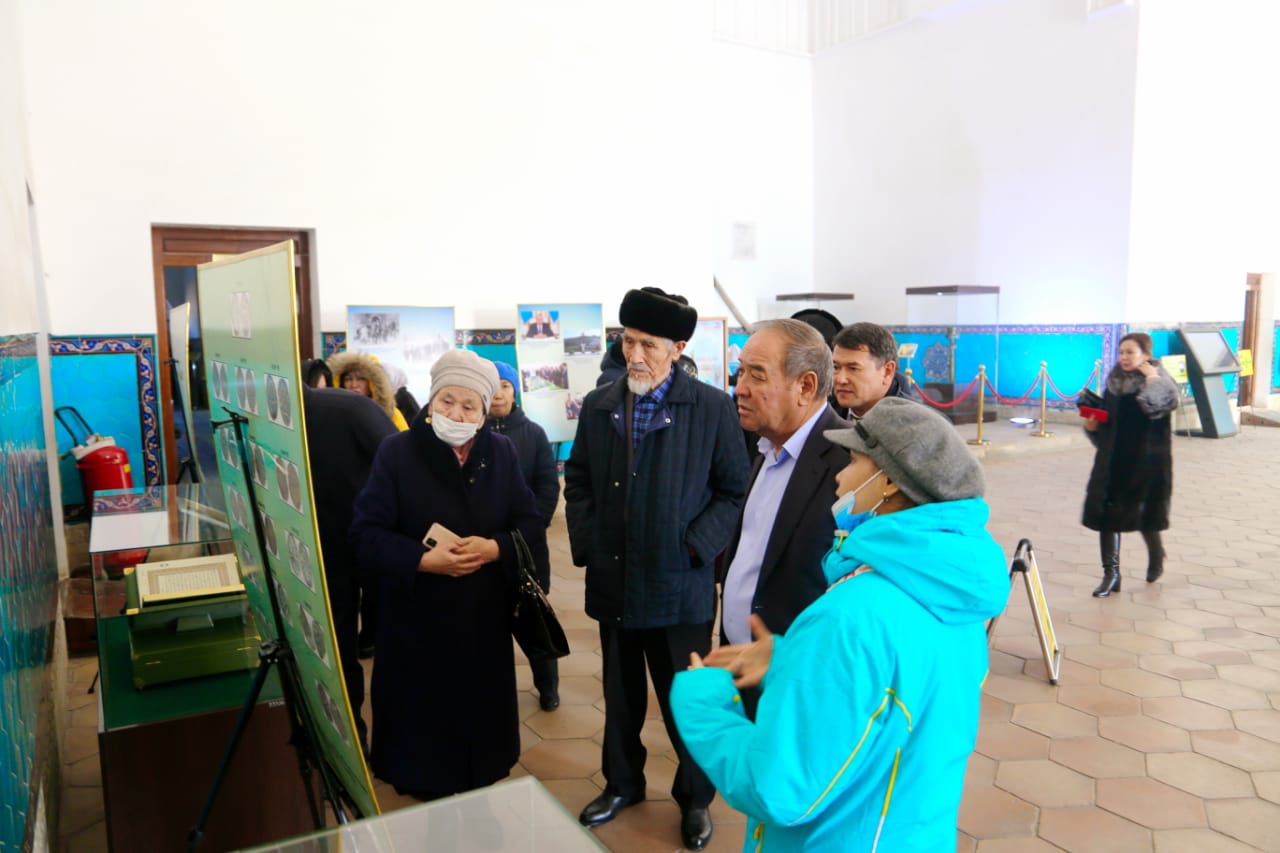 Exhibition “Elbasy onegesi” organized by the State Historical and Cultural Reserve-Museum “Azret Sultan” opened in the boiler room of the mausoleum of Khoja Ahmed Yasawi.

December 1 – The exhibition dedicated to the Day of the First President of the Republic of Kazakhstan was opened by deputy director of the reserve museum “Azret Sultan” Murat Tastanbekov, who told about the historical significance of the holiday.

– “The mausoleum of Khoja Ahmed Yasawi in the holy city of Turkestan is a place of special respect for the Turkic peoples, including the Kazakhs. The spiritual teachings of the great teacher have long been recognized as the path to freedom and independence. Former Kazakh khan-sultans, known as “The old way of Yessim Khan”, “Bright Way” of Kasym Khan”, were based on the principles of Yasawi during the rule of the country. Elbasy N. A. Nazarbayev said: “Turkestan and its great building today’s generation consider the Kazakh statehood in close unity with fate. It is a symbol of our national freedom and fundamental country.

The fact that this continuity has reached today can be attributed to the good intentions of Elbasy Nursultan Nazarbayev to our past history and spiritual heritage. In addition, Elbasy directly contributed to the inclusion of the mausoleum of Azret Sultan in the UNESCO World Heritage List, ” said Murat Tastanbekov.

Members of the City Council of Veterans Utepbergen Kuanyshbayev and Uzbekali Zhanibekov’s sister Ayganym Serim and other representatives of the intelligentsia, historians told about the great work of Elbasy Nursultan Abishevich on the development of Turkestan, modernization and preservation of historical and cultural heritage.

The exhibition includes more than 50 exhibits from the reserve- museum funds. Among them are photos and documents of Elbasy N. A. Nazarbayev in 1985 as the head of the Cabinet of Ministers of the Kazakh SSR and the first president of independent Kazakhstan, photos of official meetings with the Presidents of the Fraternal Republic of Turkey Turgut Ozal, Suleiman Demirel, Ahmet Cesar, Abdullah Gul, Recep Erdogan and former President of the Republic of Uzbekistan I. Karimov. In addition, the books of the Elbasy N. A. Nazarbayev “Gasyrlar togysinda”, “Tarih tolkyninda”, “Syndarly on jyl”, “Kazakhstan joly “, “Казахстанский путь”, “Beibitshilik kindigi”, “Tugan Elim — tiregim”, ” Евразийский Союз идеи, практика перспективы”, ” Kutup Yildizi”, “Nursultan Nazarbayev”, the book of the Holy Quran, which was donated to the reserve-museum fund in 1999, and the robe worn during his official visit to Turkestan in 2005 were presented to the public.
Guests and residents of Turkestan will be able to visit the exhibition “Elbasy onegesi” for a month.