Stone of sacrifice, IV century BC – I century AD. 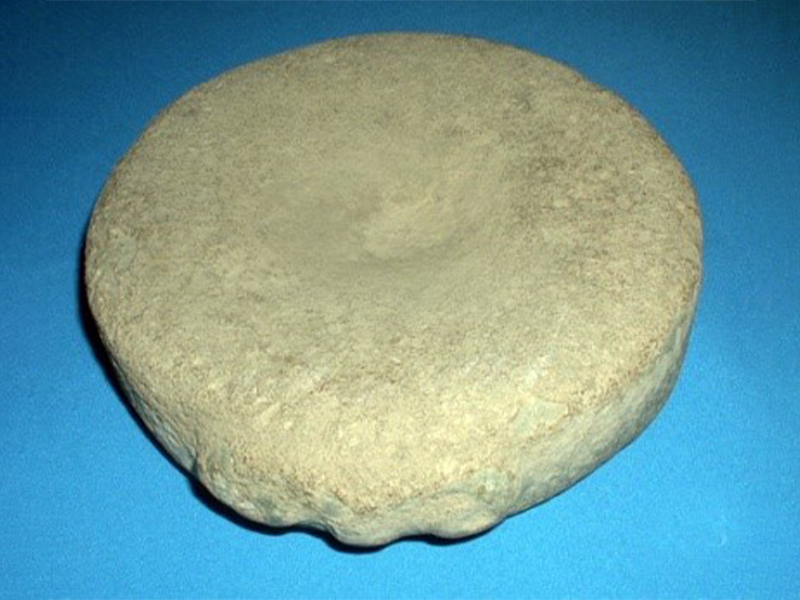 The sacrificial stone has a rounded shape, the top is flat, in the center is a recess, the head of a ram is carved on the facade. During the Sarmatian period (IV-I centuries BC).) many sacrificial stones with the image of a sheep were found in archaeological excavations. The image of a ram and a sheep had a totem symbolic significance in the mythology of different peoples. They symbolize stability and unity, patience, simplicity, softness, tenderness. At the same time, it is distinguished by the presence of animals that are most sacrificed. There is an assumption that sacrificial stones and vessels were used by nomads to perform one of the religious rituals-“purification”. Because they were convenient to carry, small and compact to put anywhere. Researcher K. F. Smirnov also noted that the discovery of sacrificial stones in the tombs during the excavation of Sarmatian burial grounds is due to religious ritual conditions. He writes that the worship of the sun and fire was one of the main religious rituals for cattle breeders along the Volga, the Southern Urals and Kazakhstan, and these sacrificial stones were used as altars for religious ceremonies. It is also said that it was used as a means of making incense or as a means of lighting a religious ritual fire. Coniferous trees, including juniper, spruce, etc., were used to create the aroma. Many people believed that the incense ceremony is a sacrifice to ancestral spirits and local deities. There are several types of incense burners in the museum’s collection: cup, vase, boat-shaped, as well as animal-shaped incense burners. According to reports, a wick is made for the smoke bowl, which is immersed in oil or in a flammable solution, removed from the hole and lit as a candle. That’s why some dishes do not contain any oil stains, only soot and odor. Such smokers can be found in the southern regions – in the excavations of Sidak, Otyrar, Zhuantobe. We are not mistaken in saying that they are related to the sacrificial stones. Accepted to the museum fund in 2000, conducted by T. A. E. engineer A. Yerzhigitova. It was found at the foot of Karatau, near the village of Koskorgan. Size h-5 cm. d-9 cm.