“In the footsteps of Yasawi”: a scientific and educational expedition was organized in Kyzylorda region 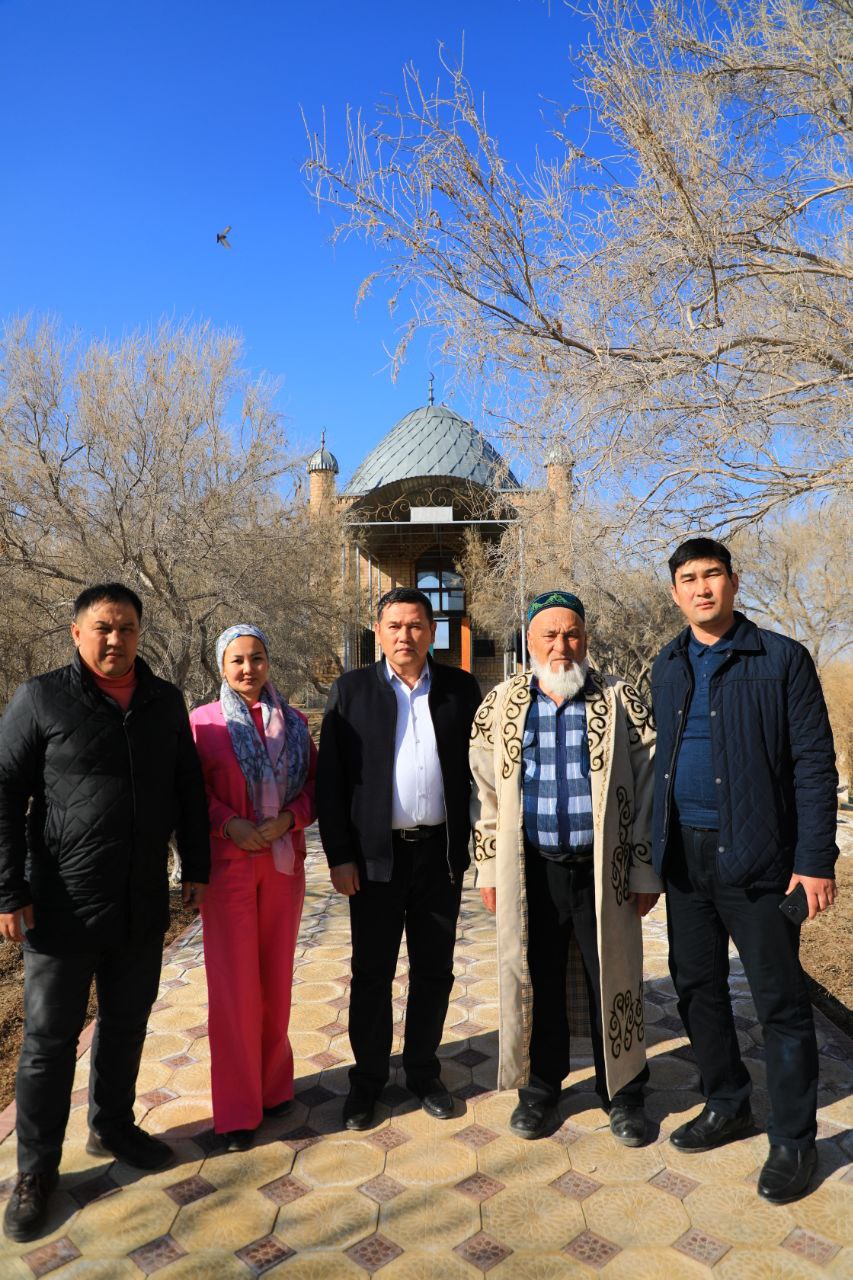 During the expedition, they visited the mausoleums of Khorasan Ata (Abdizhalil Bab), Kylauyz Zhakyp Ata, Okshi Ata and Aikosha Ishan, as well as the memorial complex Kylyshty Ata(said-Burkhanidin), Tolegetai, where they got acquainted with the history of the complex. 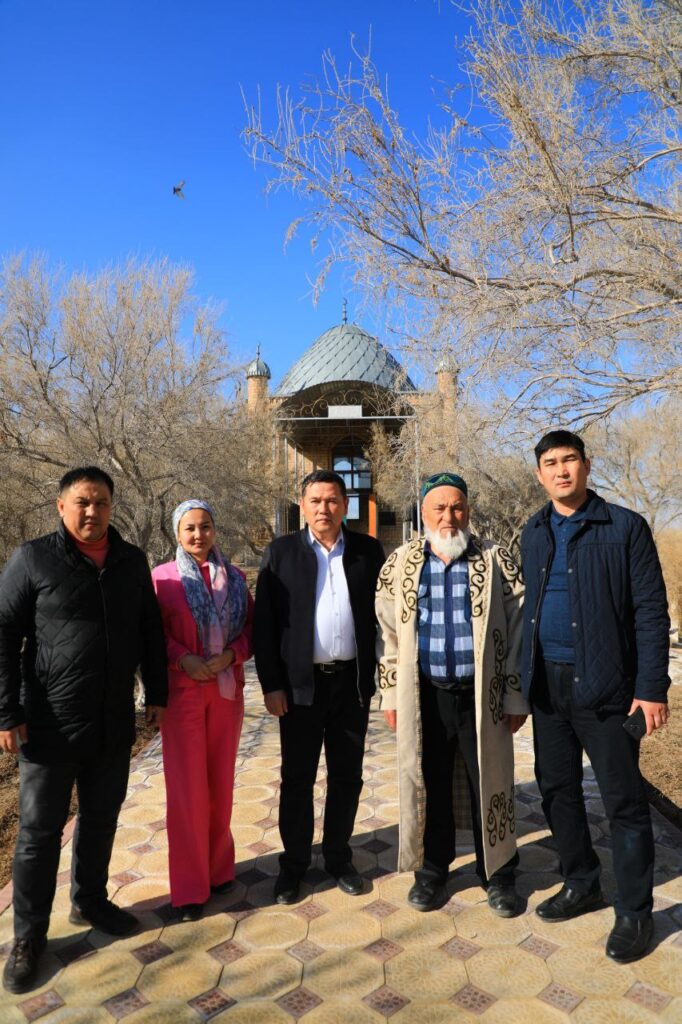 From the Hikmet of Khoja Ahmed Yasawi, you can find out that he visited the place where Khorasan Ata was buried and made a pilgrimage.
According to the chronicler, Abdizhalil Bab (Khorasan Ata) is a descendant of the Prophet Muhammad. 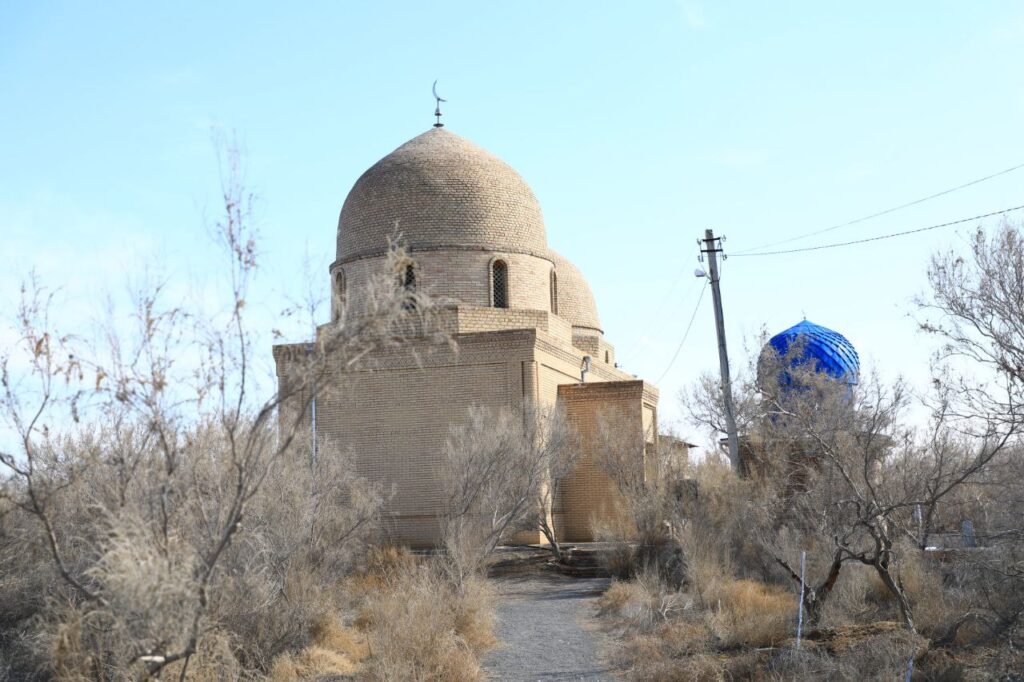 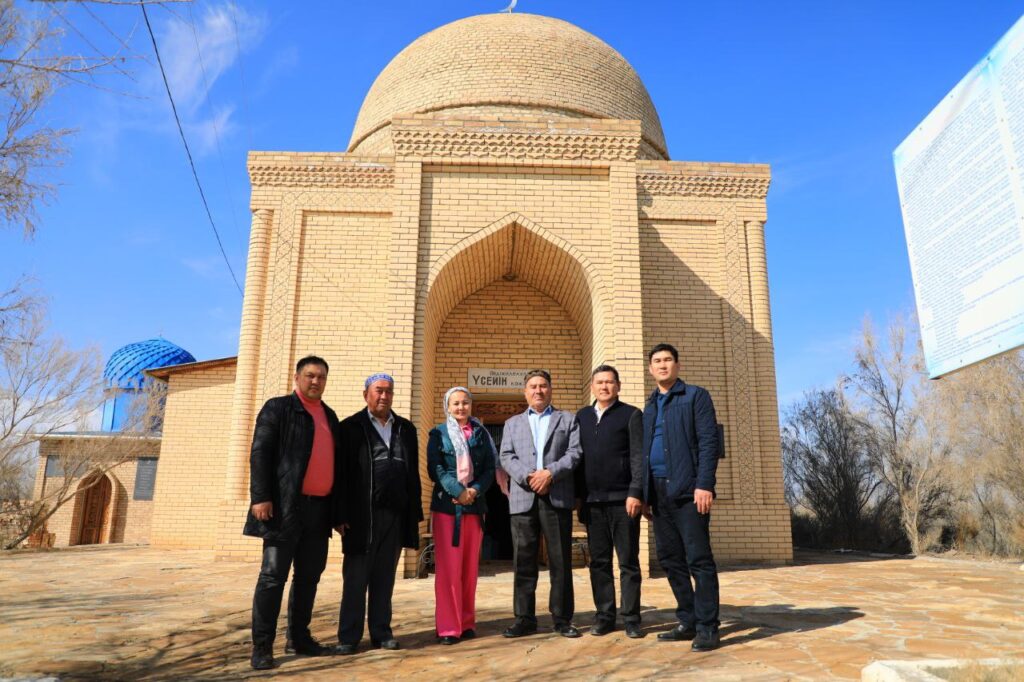 Khorasan Ata was one of the first Islamic missionaries to visit the lower reaches of the Syrdarya. Abdizhalil Bab converted the people of his lands to Islam, built mosques and madrasas, educated the people in the Arabic language and contributed to the growth of their culture. He was called Khorasan Ata because of his good deeds in the Khorasan region. He was a great general and a hero with the heart of a tiger.
– “According to historical sources, Khoja Ahmed Yasawi, until the age of 63, during Oraza and Eid al-Adha, visited the tombstone of Abdizhalil Bab, read a prayer, looking at a copy of the Kaaba in Mecca.
This is evidenced by the poems of Khoja Ahmed Yasawi:
“Oh, Baba Khorasan arasan, I am here,
Came to pray for you
For my good deeds that I have done
Be merciful to me”
The word “arasan” here means “healer”. Khorasan Ata was a scholar, a brave and courageous, a skilled military commander, a healer, an educator who spread Islam and culture, who educated the people in morality, honesty and knowledge, “said Kuralai Makulbekovna, methodologist of Zhanakorgan district museum of local lore. 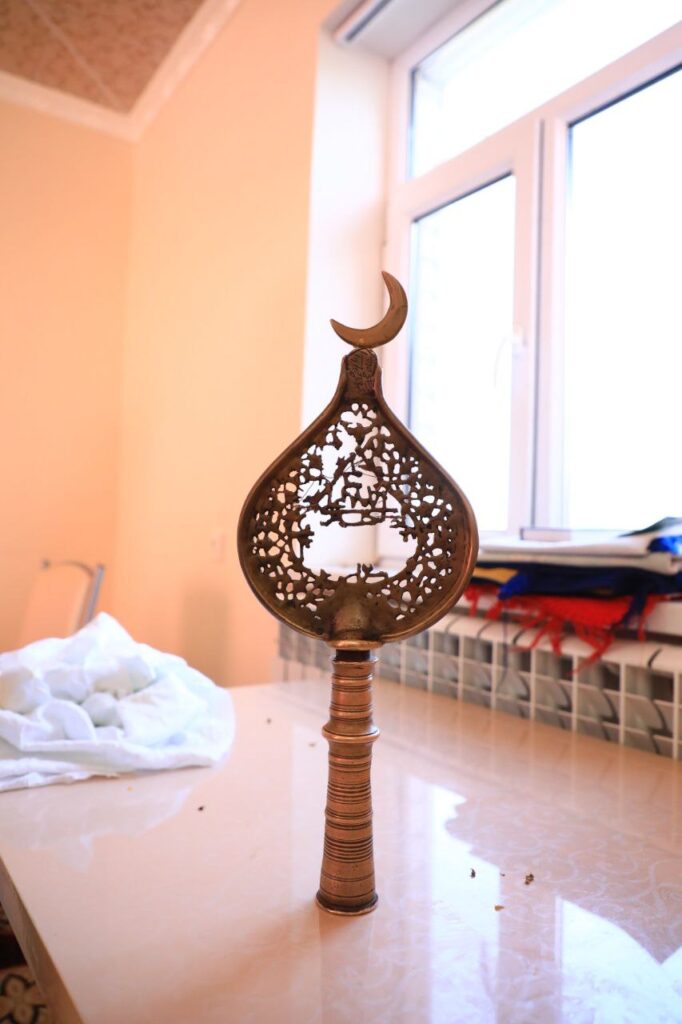 The flag inherited from Azrat Ali to Khorasan Ata was also presented at the Khorasan Ata Mausoleum. The handle of the flag is made of bronze and the pointed end is made of copper. At the top of the flag you can read the Arabic inscription “Allahu Ahad”, and below it – “Ali”. Khorasan Ata mausoleum is 14 meters high, 16 meters long, 8 meters wide and has two domes. The mausoleum has preserved its former architectural appearance. 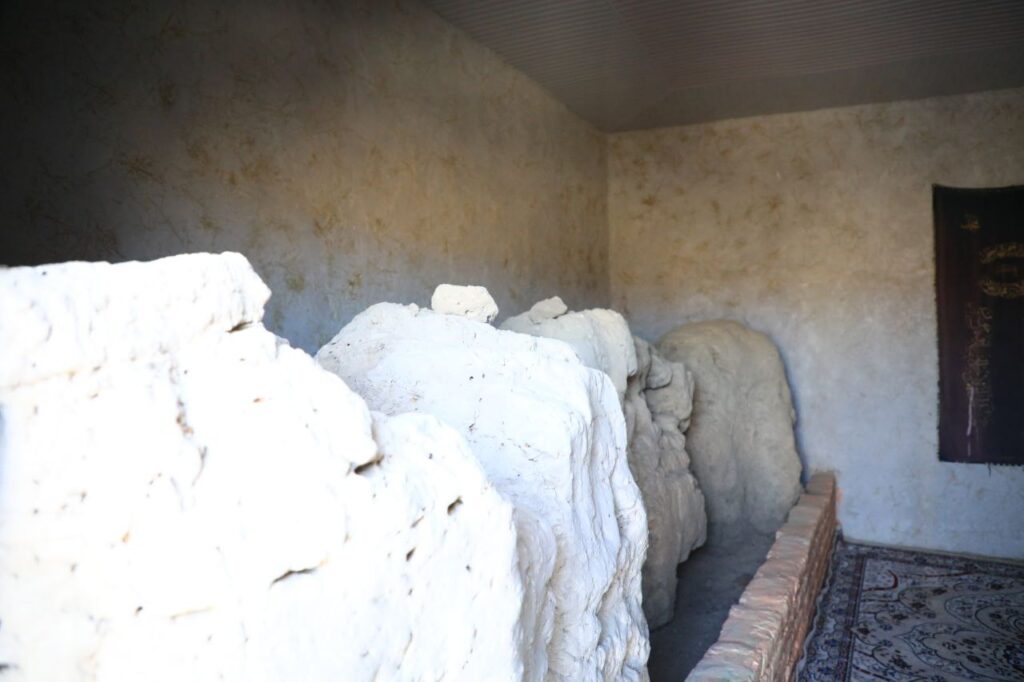 The expedition also continued in the mausoleum of Kylauyz (Zhakyp) Ata, a contemporary of Khoja Ahmed Yasawi, a scientist who contributed to the spread of Islam. The mausoleum of Zhakyp ata, who lived in the XII century, is located 10-11 km from the village of Kyrkense in Zhanakorgan district. According to folklore, Kylauyz ata made a ditch through which water was pumped from the River and thus helped the residents to engage in agriculture. Kylauyz Ata was a holy man who treated people who were bitten by a black worm, a snake by reading the Koran, and treated those who had toothache. Kylauyz (Zhakyp Ata) is the son of Abu Layis. Abu Layis was a scientist and thinker who lived in the IX-X centuries, was one of the propagandists of Islam and lived in Samarkand. There are many legends about the miracles of Kylauyz Ata and Khoja Ahmed Yasawi and their connection with each other. 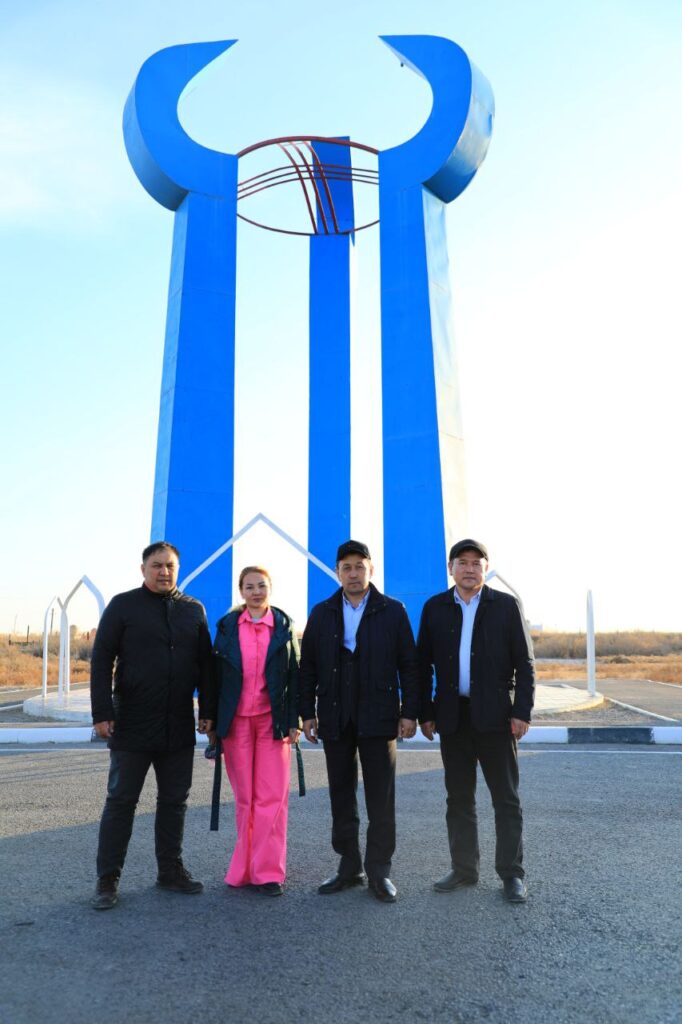 The expedition group visited the mausoleum of Aikozha Ishan, which has a special place in the educational system of Islam in the Kazakh steppes. The religious teacher, Saint Aikozha Ishan, is buried in the mausoleum, located 6 km south of Besaryk station. Currently, there are more than 400 families from his 11 children. The domed mausoleum and the mosque of Baba “Aikozha” were built under the leadership of his eldest son Ibadilla. 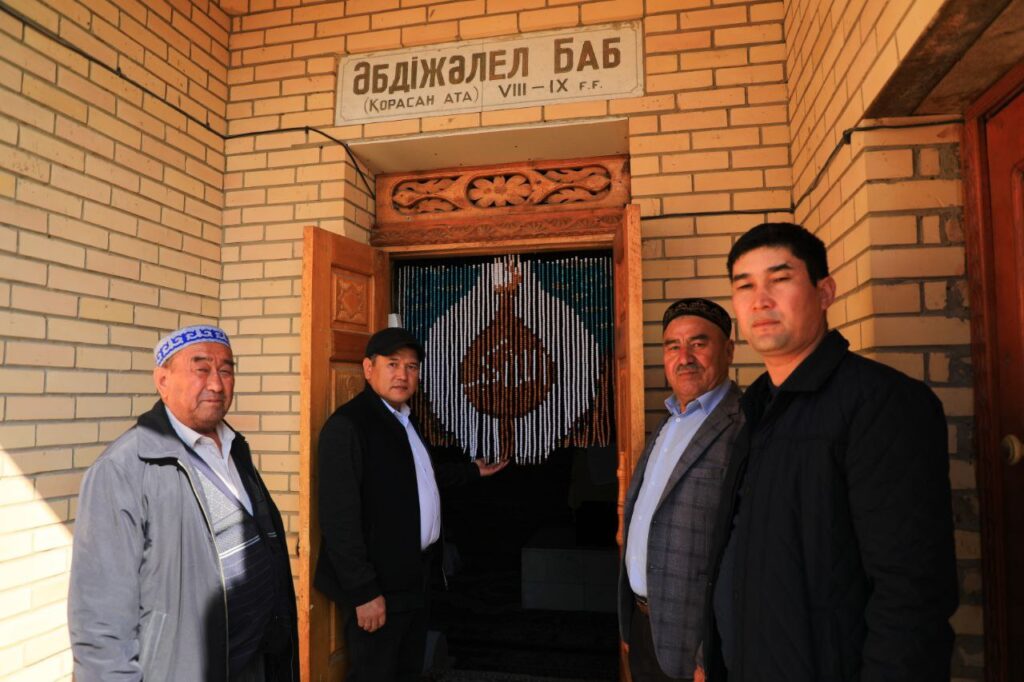 In addition, the mausoleum of Okshy Ata in Shieli district was visited. One of the oldest monuments is the Tomb of Okshy Ata, which is a relic of the Oghuz – Kipchak time. The burial place of “Seven saints necropolis” is located in the Okshy Ata mausoleum. Okshy-Ata mausoleum has a deep history. According to some scientific sources, it is noted that this sacred place was the place where our ancestors lived a thousand and a half years ago. As the scientist Auelbek Konyratbayev noted, before the construction of the famous mausoleum of Khoja Ahmed Yasawi in the XIV century by Aksak Temir, Okshy Ata was a pantheon where the noble citizens of ancient Turan, Oghuzs and Turkic-Kipchaks were buried. 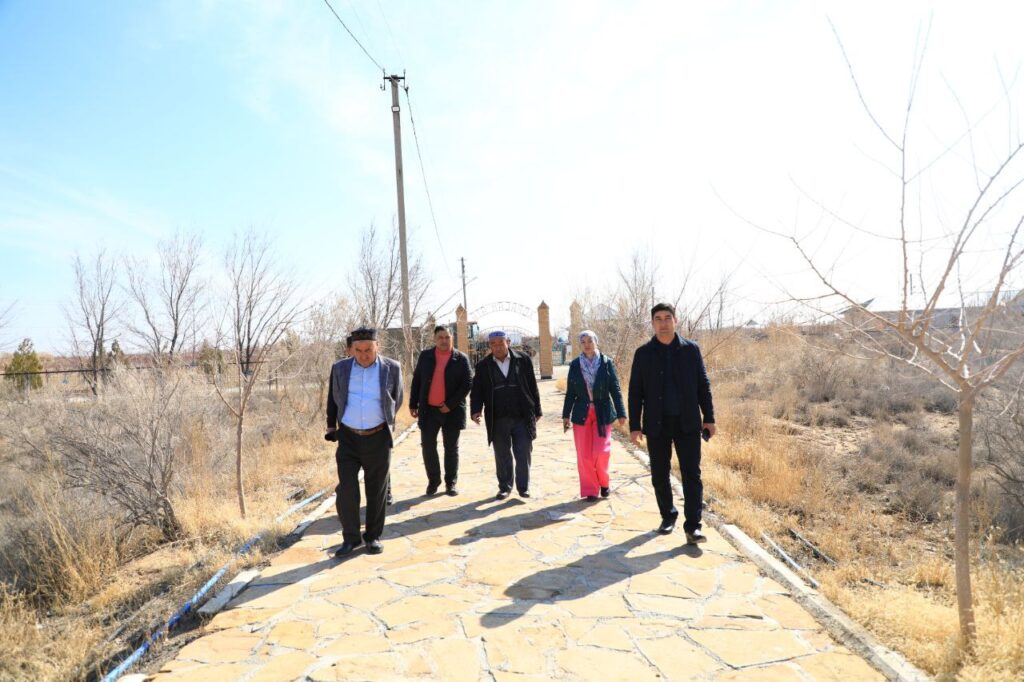 – “Such great people as Okshy Ata, Yesabyz Ata, Asan Ata, Gayip Ata, Kish Ata, Dosbol and Bala Bi are buried in this burial ground. Doctor of philology, porfessor, turkologist A. Konyratbayev concludes that “Okshy Ata-Ata lived in the XI century, defended this region from the enemy, a hero, a saint, a great historical figure who fought for the future of the people. “The scientist also gives evidence that Okshy Ata died in 1043 and was buried in the Tomb of his current name. The mausoleum of Okshy Ata is a monument of ancient Oghuz times, the mausoleum erected on the head of batyr is sacred. His real name has several names among the people. Some say that his real name was Kogentup, and others -Ibrahim. If his nickname was Kogentup, then the name by which people knew him was Okshy. “There are many legends and stories about the pilgrimages of Okshy Ata to Khoja Ahmed Yasawi,” says Bekbolat Temiralievich, a researcher at the Shieli Regional Museum of local lore. 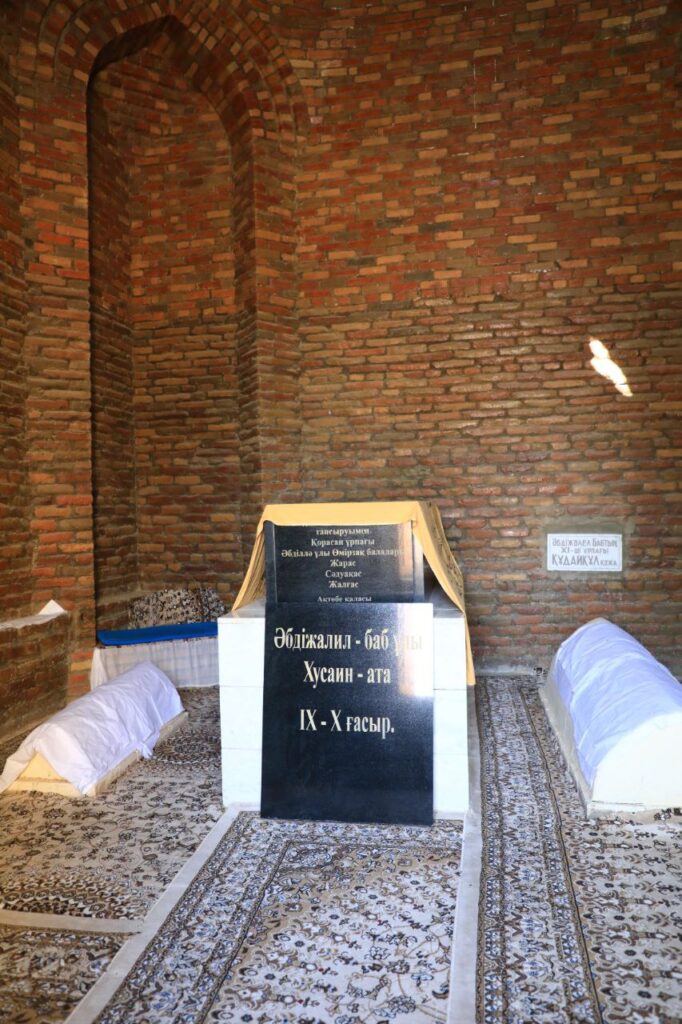 – “The region along the Syrdarya is rich in historical sites and sacred places. In particular, there are many people associated with the public place of Khoja Ahmed Yasawi. In the future, the research work will continue,” said Murat Tastanbekov, deputy director of the State Historical and Cultural Museum – Reserve “Azret Sultan”.
The purpose of the scientific and educational project “In the footsteps of Yasawi” is to collect and popularize new information about Khoja Ahmed Yasawi and the people buried in Turkestan.
The press service of the state historical and cultural museum-reserve “Azret Sultan”