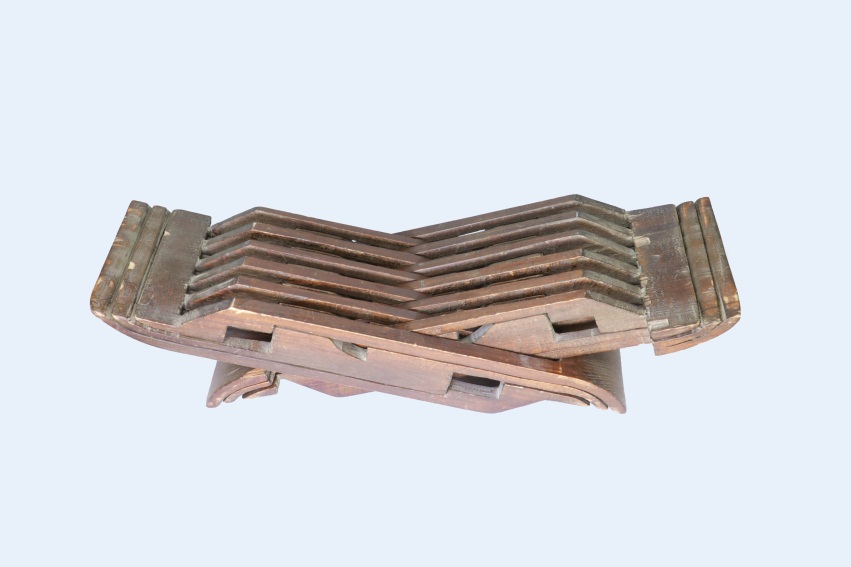 Kursi is a wooden book holder. Several types of wooden kursi are kept in the funds of the Azret Sultan Museum-Reserve. One of them is a wooden kursi with the number KK 77. This unusual kursi is carved from solid oak without nails or glue, and painted with brown paint. The technology of making a folding kursi that gives the shape of an open book is very complex. Kursi has been used since the Quran was written on paper. It is known that every muslim who professes Islam does not hold a book of the Quran in his hands without washing and highly reveres it, putting it on the top shelf. Kursi was used in the first place, so that when reading the Koran, do not put it on the floor, and secondly, the chair was very comfortable for a person who reads the Quran for hours. Eastern peoples called kursi in different ways: the Uzbeks called it “lauch”, the Tatars-“lavh”, the Iranians – “reil”, and the Arabs – “rahle”. The length of the kursi folded is 49 cm, the width is 7 cm. Kursi was transferred to the museum by the restoration workshop of the Almaty Kaz museum in 1978. Masters of eastern peoples made kursi from various materials, especially popular were kursi made of oak or walnut.

The winners of the “Best Guide 2020” have been announced