The Tomb Of Khoja Ahmed Yasawi 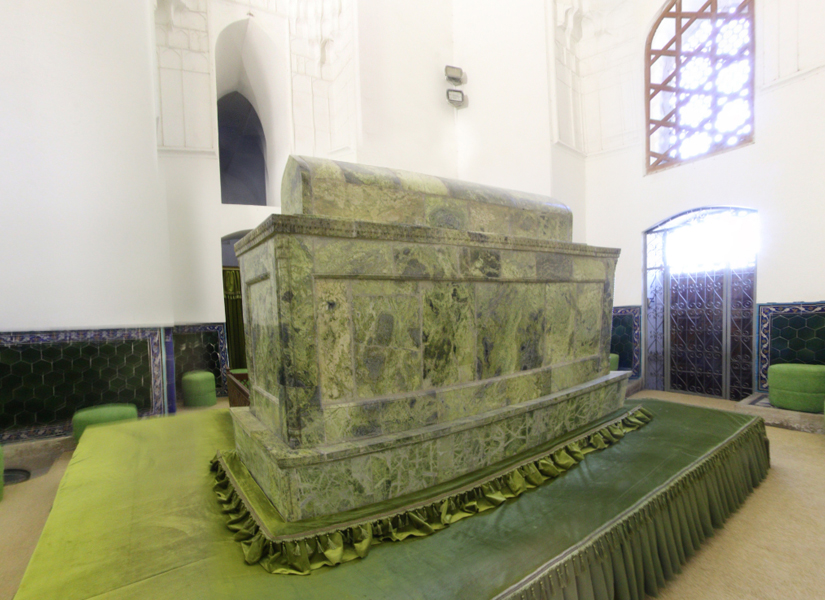 The tomb of Khoja Ahmad Yasawi – Gur Khan, also square in plan with sides of 7.15 m, carries the same shallow niches decorated with openwork stalactites along the centers of the sides, as in kazandyk. During the restoration work in the tomb were identified small fragments of wall paintings and, in particular, the epigraphic fragment on the dome frieze of the tomb. The lower part of the walls is decorated with a mosaic panel of hexagonal tiles covered with green glaze.

On the floor of Gur-khans arranged rectangular elevation 4.7 x 3.8 m, height 46-50 cm, built of baked  brick. In the center of the tomb, in the Eastern part of the elevation, a tombstone of Khoja Ahmad Yasawi was built – a ledged tomb with a top in the form of an arch. It is faced with polished pale green plates serpentinite-coil with white, yellow and black veins. The base of the tombstone on the perimeter of 1.05 x 2.94 m is strengthened by protruding wooden bars with a height of 14 cm. The total height of the tombstone is 1.85 m. In the past, the tombstone was covered with patterned bedspreads, one of which, judging by the patterns, refers to the XV century., has embroidered inscriptions.

Gur-Khan is covered with a double dome. Ganch decor hides the lower constructive dome. Outside Gur Khan stands out skillfully decorated ribbed dome (has 52 ribs), raised on a high drum. The outer diameter of the dome of the tomb of Khoja Ahmad Yasawi is 10 m.

One of the two entrances to the mausoleum, preserved in the XIV century – kabirkhana door. This door is an excellent model of medieval ornamental doors. Doors open two-sided, decorated with small bones, framed with tin and gilded inscriptions. The upper part of the door between the two squares bordered with patterned flowers and leaves has texts from the hadith of the Prophet with the seal of sulus. In the Central part of the door, in a half-pipe, the inscription in Persian under the signature of Kuf: “Bless”. On the door surface of the two bronze plates there are inscriptions written with the signature of souls. Many inscriptions are erased, partially read or come to reading only some words and letters, in the writings there are excerpts from the hadiths and wise words.