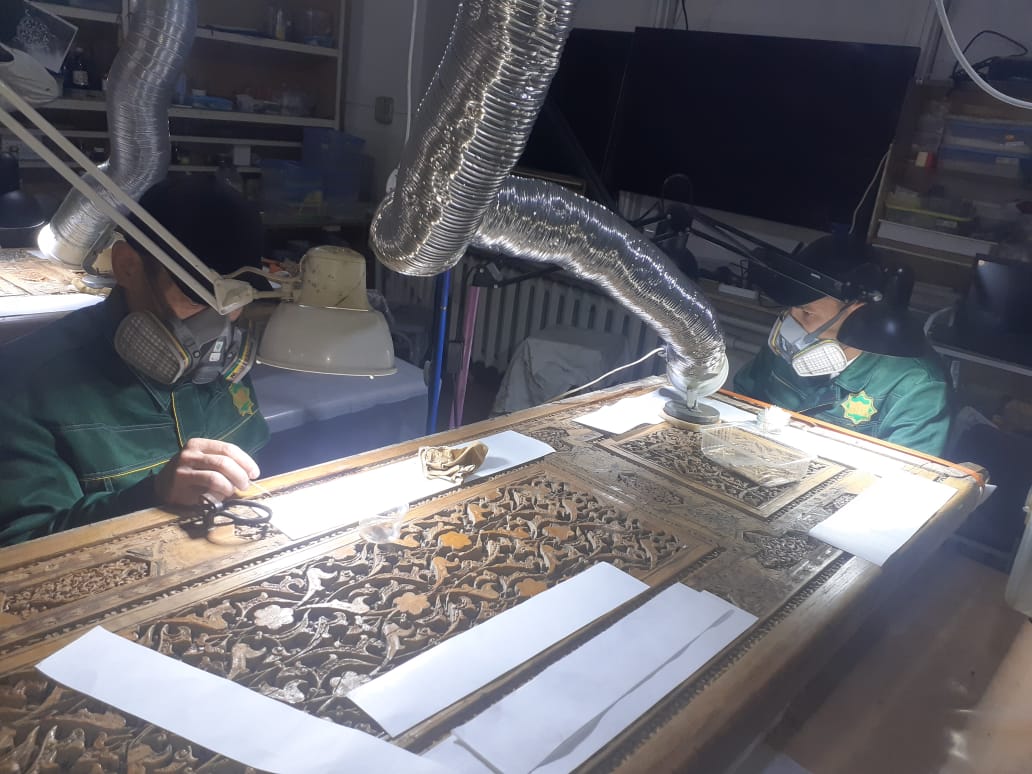 Employees of the State Historical and Cultural Reserve-Museum “Azret Sultan” got acquainted with the scientific-restoration laboratory “Kyrym araly” in Almaty and exchanged experiences.
Dauletiyar Adiev, the custodian responsible for the care and preservation of the exhibits in the reserve-museum, and art-restorers Edil Mutashev and Nurzhan Tadjibayev took part in the restoration of the medieval door in the cemetery of the mausoleum of Khoja Ahmed Yasawi.

– “Restoration and preservation of the door consists of five or six stages, depending on the degree of damage to the relic. No one can say exactly how many stages it will consist of. At the first stage, there is a lot of work to clean all the dirt, soil and other harmful substances from the main components of the door”, says restoration specialist Kyrym Altynbekov.

Employees of the reserve-museum, who are involved in the restoration of the most valuable relic of the mausoleum of Khoja Ahmed Yasawi, shared an interesting situation.

-“During the cleaning with a special liquid from under rust, inscriptions and patterns written in gold and silver began to appear on the iron hoops on the doors. In order not to damage the historical inscriptions, Kyrym Aga himself works around the clock. This moment is a historical moment for us, for the Reserve-Museum. Because the doors of the tomb in the mausoleum of Khoja Ahmed Yasawi are a great heritage of the Middle Ages. The wooden artifact, which has seen the image of centuries, has changed its original state and is in the process of biological aging. It turns out that on the surface of the wood, in addition to the dirt, which has been filled for many centuries, their place is filled with unknown mastic to fix the once damaged patterns. We were glad that our artifact is returning to its centuries-old image,” said Dauletiyar Adiev, the custodian of the reserve-museum “Azret Sultan “.

During the visit to Almaty, an internship will also be held on the issues of restoration and preservation of various types of wood, metal, and paper heritage. It is expected that consultations with qualified specialists will contribute to a comprehensive experience in improving skills, preserving historical heritage without damaging the future.