PEOPLE WITH DISABILITIES VISITED THE MAUSOLEUM OF KHOJA AHMED YASAWI 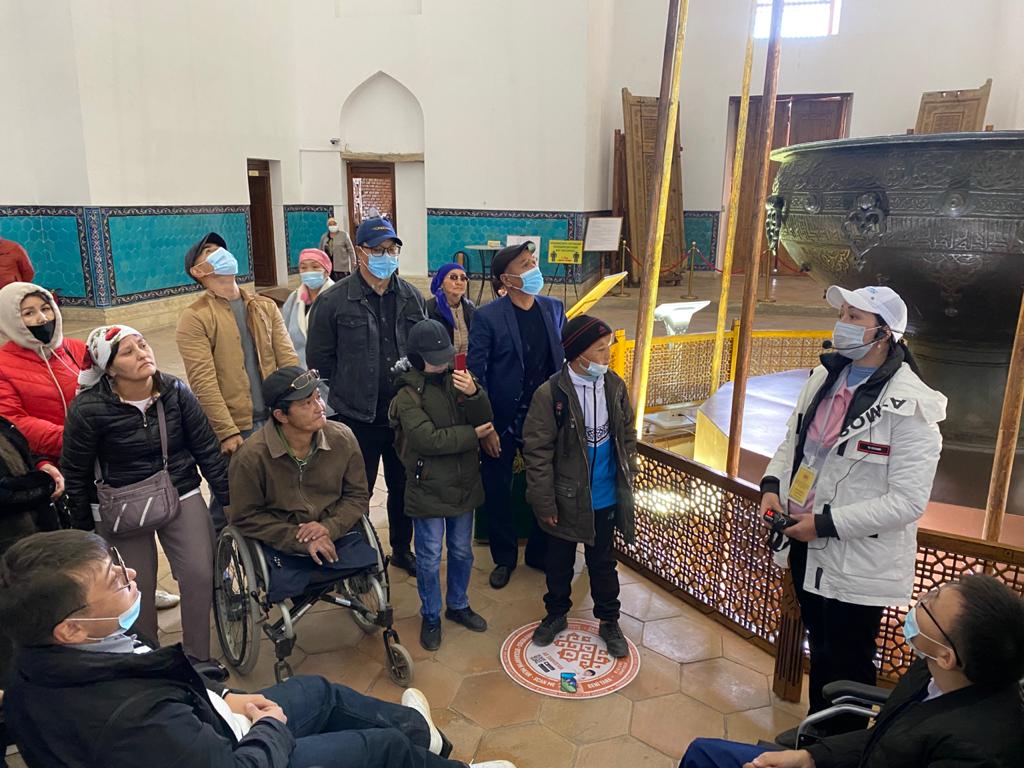 Deputy of the Turkistan regional maslikhat Galymzhan Kamytbekovich together with citizens with disabilities of Tolebi district visited the mausoleum of Khoja Ahmed Yasawi.
Acting director of the State Historical and Cultural Reserve-Museum “Azret Sultan” Yersin Tazhibayev met the guests of the event, which was organized in order to visit the sacred and historical site and get acquainted with the sights of the city.
– As a member of the Turkistan regional maslikhat from the Nur Otan party, when I held a public reception in Tolebi district, one of the people with disabilities came with such a request. Special people at the public reception:
“Every time we watch TV, we are amazed that the holy city of Turkistan has changed beyond recognition since it became the regional center. Every time when we see photos of Turkistan in the media and on social networks and read about its rapid development, we become curious and want to see it with our own eyes. Everyone who has the opportunity visits Turkistan”. After making such proposals, I decided to bring these citizens to our holy city. In general, accession to the number of developed countries in the world is not measured only by economic growth. One of the characteristic features of a civilized country is the creation of maximum conditions for people with disabilities. That is, it is difficult to say that the country is developed if the necessary conditions are not created for such citizens to adapt to society, receive high-quality education and employment,”said Deputy of the regional maslikhat, well-known journalist Galymzhan Elshibay.
A total of 20 people, including people with disabilities of the first and second groups, their caregivers and social workers, had the opportunity to visit the city of Turkistan and visit the sights of the city.
The guests were informed about the mausoleum and the people buried around the mausoleum, and historical artifacts were presented. The guests expressed their gratitude to the organizers of the trip. During the meeting, a small booklet dedicated to the history of the mausoleum was presented to citizens with disabilities on behalf of the Azret Sultan Museum-Reserve.

Exhibition “ Heritage of Yasawi” was presented

In the mausoleum of Khoja Ahmed Yasawi, 100 prayers of the Koran were performed for the spirits of ancestors