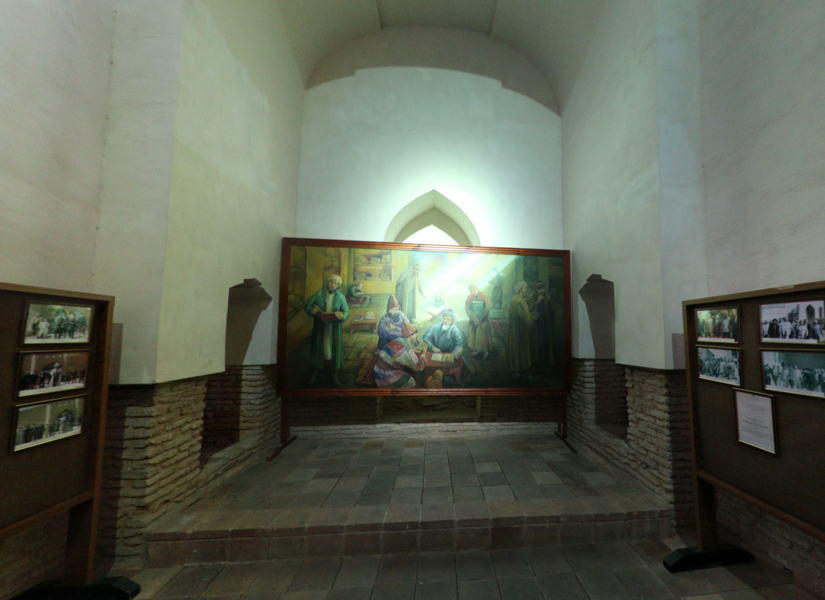 Library is a square room in which the ceiling is framed by a hexagonal dome, under the influence of deep openings, elongated, at the level of the second floor there are doors leading to adjacent rooms through the bypass. According to sources XVI in the concept of library existed in Turkestan. Scientist A. Derbisaliev noted that in his research about a hundred scientists were released from Turkestan under the name of at-Turkistan. In General, Islamic scientists-mathematics, chemistry, physics, mechanics, astronomy, medicine, philosophy, etc. have made an invaluable contribution to the development of science. The library of old editions of ancient manuscripts used to be located here. There were places for copying works, registration of cases. The proof of this is that the room is called a library. Documents related to the history of Turkestan are stored here in various data and receipts in the XV-XIX centuries. Of the oldest books extant, of the XII century Qur’ans of the XV century algebra, mathematics, many works of Eastern authors, including “Diuani Hikmet” Ahmet Yassaui in 1934 transferred to the USSR Academy of Sciences and the Department of the rare books the national library of A. S. Pushkin.

WHY DID AHMET YASAVI’S BROTHER SADYR SHAIYK SETTLE ALONG THE SYR DARYA?