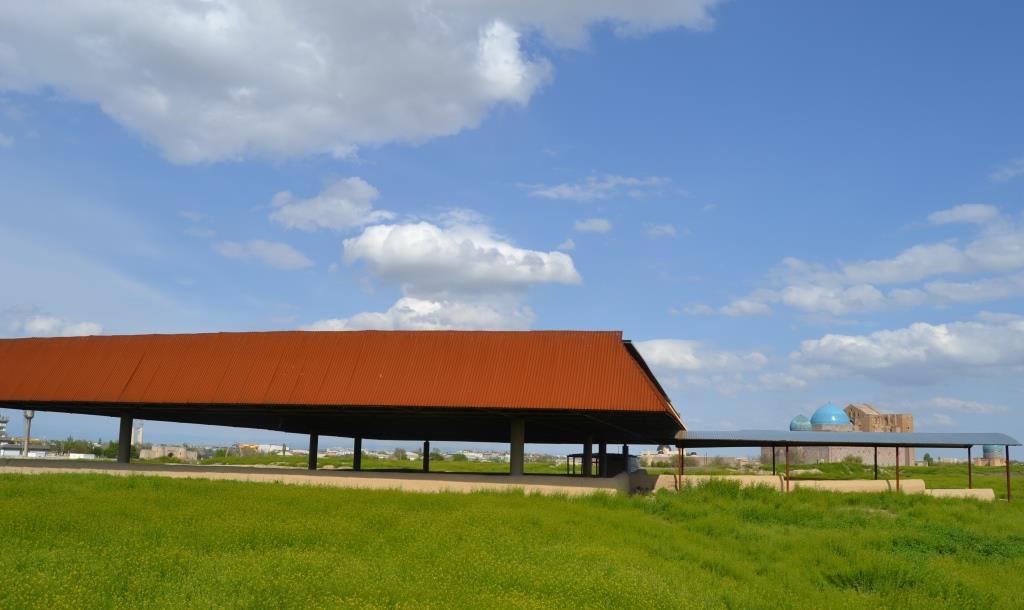 Khan ordasy (between 17th and 18th century, the middle of the 1st millennium AD) the Khoja Ahmed Yasawi mausoleum is located 300m to the west. Coordinates: 43˚17.847, 068˚15.966. The 232m above sea the level. From the history is clear that in XVIII century in the old Turkestan city have lived two Khan’s residence (citadel) in row. Regarding this, full data can be found in the articles of I.V. Erofeeva in “Kazakh Khans and khan’s dynasty in the middle of XVIII – XIX” and B.T. Tuyaqbaev, A.N. Proskurin “Regeneration project of the citadel in the Turkestan city”. From the article of historian I.V. Erofeeva between 1743-1745 is clearly said that Abulmambet khan and the eldest son of Sämeke Khan named Seit, have separated into two parts the Turkestan and the towns around. Regarding this, we can encounter in the first documentary XVIIcentury D.G. Messershmidt’s card. In 1875 the map of the cityand project in 1954 year comparing the card and the subsequent plans and schemes Khan revealed the exact location of the Khan residency. During the archaeological excavations were found 6 layer of the construction at the end of XVII century and at the first half part of XVIII century the temple was formed between the first half of that period the residency of Khan – Tauke Khan, Kayyp Khan, Bolat Khan, Sämeke Khan and Abulmambet khan, was proved that they lived during this period. The period of 1743-1745 the eldest son of Sämeke Khan Seit Ahmed Yasawi from the east of the mausoleum other output form the surface of the second Temple Khan mausoleum. In 1771 year after the Abulmambet khan’s death we can conclude that, the ongoing excavations of the residency his son Bolat Khan inhabited till 1798. In 2011 15 rooms were peeled in excavation, the walls were covered with clay kesekpen, conservation and the importance of their height increased from 1.2 m to 2 m. Sipahi in the rooms, ovens, taşnawlar, sandalwood were restored. The walls of straw mixed sıbaqpen Khan sıbalıp those reflected in the modern part of the House.