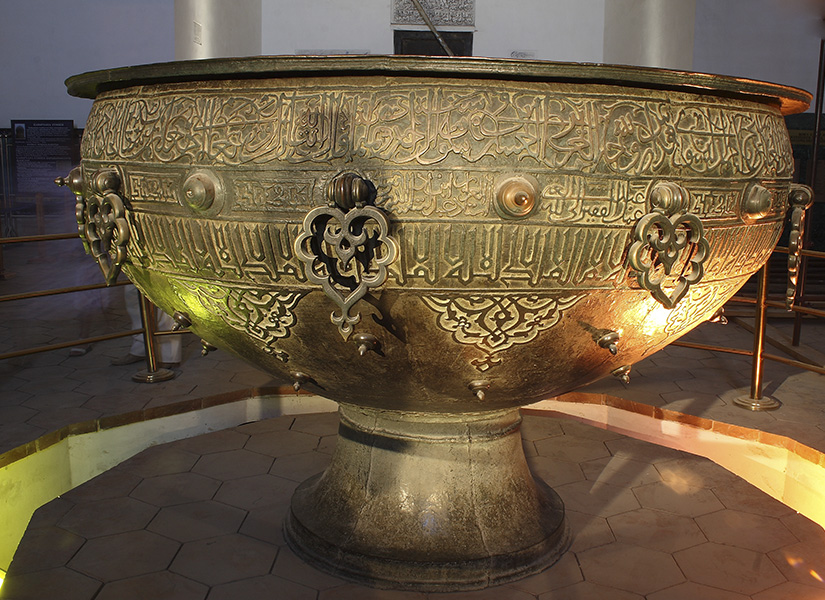 The Central hall – kazandyk, which is a huge square room with sides of 18.5 m. In the center of the room is a huge boiler – a masterpiece of medieval bronze art, the work of ‘Abd al-‘Aziz Ibn ustadsharaf al-DIN Tabrizi. The height of the boiler 158,3 cm, the biggest diameter of the edge of the rim 243,4 cm its own weight seemed about two tons, it could hold 3000 liters of water. The boiler is specially made for the mausoleum of Khoja Ahmad Yasawi by order of Amir Timur on June 25, 1399 Once, water was poured into Taikazan, which, after Friday prayers, was distributed to visitors to the Mausoleum. Due to taikazan, the central room of the mausoleum was called Kazandyk (a boiler room). To Kazandyk on the East and West sides adjacent to the two small floor khujdras – cells, the living room.

Taikazan was built in 1399 in the village of Karnak, located 25 km from the city of Yasy. The inscriptions on the taikazan page consist of three parts. The upper part contains the 9th extract of the Quran, beginning with an introductory word, and then connected to the hadith of the Prophet, and then it is indicated who made the cauldron and the year of its commission. The second belt has ten ears of the taikazan and twenty cartouches of ten ornamental volumes. On two cards which is located nearby, the name of the master is written. In the third row, 22 repeated warnings of God’s power were written.In the North side of the Kazandyk room, in front of the entrance of the burial ground, there is a flag with a bronze Lauha 8 meters long. In 1885, according to the notes of N. I. Veselovsky, who was in the mausoleum, “a green flag stands above the door which length  exceed four fathoms.”

In the center of the northern passage is decorated with ornaments, a wooden door of the 14th century connects the boiler room with the grave. The door frame is framed by a metal sheet, on the surface elongated coinage are written in gold letters. Above the door there is a stone board with an inscription on it.

Kazandyk is framed by the largest dome in Central Asia and Kazakhstan. The dome is lined with green paint. The height of the boiler dome is 39 m. The dome is decorated with embossed stalactites on the inside. At the beginning of the 20th century, traces of a painted ornament were clearly traced on their surface.